Building a Raspberry Pi case out of Lego My Raspberry Pi finally arrived! Lego seems to be a popular choice for case-building, so last time I was at my parents', I dug out my old Lego and extracted all of the yellow pieces I could find. Some of these were extremely grubby, but it turns out that a couple of hours soaking in biological washing liquid is just the thing for getting rid of 35-year-old grime. And then of course I had to lay them out to dry: 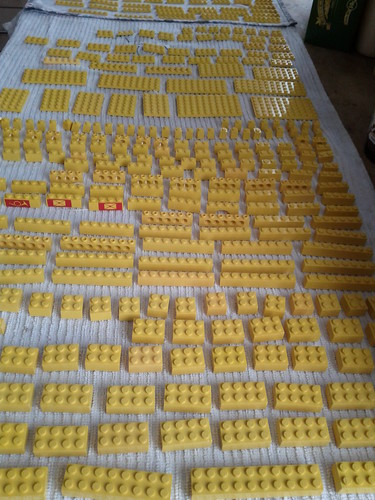 Katharine pointed out that this may be what autism looks like

I then found myself at a Lego store, where you can buy a half-pint pot of pick-and-mix Lego for 6 quid, so I picked up a few extra bits there. I also found a Lego Star Wars model that my niece and nephew had bought me a while ago (hence the Stormtrooper and big gun in the finished model above).

So armed with all of this Lego, I set about putting together a case.

The Pi fits nicely into a 10x10 square of Lego, leaving the connectors at either end exposed. So my base layer: The Pi sits on this, and is kept in place by a couple of pillars either side of the component-video connector (I don't currently intend to use this, or the audio-out connector, so these will not be exposed). Upper layers sit upon these pillars, holding the Pi very tightly in place: The sides are now built up: And then the top: This is by no means my last Pi case (this one is not perfect, I have a lot more Lego, and I expect I'll buy more Pis when they become more widely available), but the 10x10 thing seems to be a good starting point for my next effort.

The entire photoset is here (on Flickr, which I've decided to give another go. Their new uploader is comically broken though, at least on this Chromeboook).